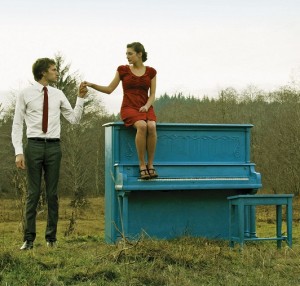 The Piano- Grandest of Stringed Instruments

The Piano is perhaps one of the grandest and most diverse of instruments today. From painting complex concertos by the most famous pianists on the walls of Carnegie Hall to the simple living room family song get together, the piano is truly a “Grand” stringed instrument.

Among musical instruments, perhaps the drum is the oldest known to mankind, next to the human singing voice. The piano is a more recent development, perhaps having it’s early influence by the hammer dulcimer which preceded the piano’s invention.

It was during the middle ages that men tinkered with the development of stringed instruments that could create tones by the striking of keys on a keyboard, but perhaps the closest and earliest cousin to the modern-day piano was the harpsichord and clavichord. The difference between a piano and the other two keyed instruments has to do with the way the instrument causes the string to vibrate, thereby creating a tone. Clavichords use metal pieces called tangents to strike the string, Harpsichords use quills to pluck their strings, while the piano uses a felted hammer to produce its beautifully resonant and “grand” sound.

The first piano was actually created around 1700 by an Italian Instrument keeper and maker named Cristofori, made for the Medici Family of Tuscany. Cristofori was an accomplished harpsichord maker and had extensive knowledge about the workings of keyed / stringed instruments. Since his time, pianos have become perhaps one of the most popular instruments decorating famous concert halls as well as family living rooms around the world.

A Bit About the Construction

In design, the piano has two basic models, with several adaptations: the upright and the grand.

Tough pianos vary greatly in style and model, they have the same conceptual framework for creating their eloquent sound.

The soundboard surrounding the perimeter of the piano acts as the amplifier for the strings sound vibrations. Without the soundboard, the piano would have quite a weak projection.

There are more than 200 strings on an 88 key piano of various thickness and construction to give it the diversity of notes, all balanced in their ability to produce volume.

The pedals have a few musical purposes and help to provide dampening or muting strings, as well as helping them to sustain their tone.

The pinblock acts as the tuners surface that allows the piano to be in the chordophones with guitars and other stringed instruments. The pinblock hold one end of the taut string so that it can be struck to produce sound and is the place where tuners fine tune the pitch of each string.

Though the construction of the piano and it’s distant cousin, the acoustic guitar are so very simple,in the hands of an experienced musician, they can be used to create the most dramatic and awe-inspiring music.

Others in the String Family – The piano is among a diverse family of beautiful and diverse instruments known as chordophones as mentioned earlier. A chordophone is simply a class of musical instrument whereby sound is created by vibrating a string that is taut between to points. Other equally sophisticated yet simple instruments in this chordophone family include, banjos, guitars, violins violas, cellos, and harps just to name a few.

In summary, even a toddler or non-musician can hop up to a grand piano and accidentally strike a perfect “C”, giving the piano a welcoming appeal to people of all skill levels and ages. With other stringed instruments such as the guitar, harp, banjo or violin, success at an early age is not such a guarantee. From the most novice beginner to the most accomplished virtuoso, the piano has arguably one of the simplest and yet most complex and fascinating appeal among all stringed instruments.

Beginning and budding musicians can find the piano to be an invitingly simple start to a lifelong music career. While novice violin, banjo, and beginner guitar students will find more barriers getting a clean sound in their first months bowing, plucking or strumming, a brand new piano student can touch an ivory key and instantly hear one of the purest sounds on Earth.

Aaron Schulman has been a musician since 1984 and a guitar player since 1990. You can read more about real life acoustic guitar reviews if you are searching for the best beginner acoustic guitar for your investment.